The presence of rodents may represent a risk factor in the introduction of avian influenza in the poultry industry.

IZSVE Research project 06/10 was carried out by a group of researchers of the Istituto Zooprofilattico Sperimentale delle Venezie (IZSVe), and provided sufficient data in support of this assumption. The study mainly investigated the pathogenicity and transmission of avian influenza viruses to a common species of wild rodent. 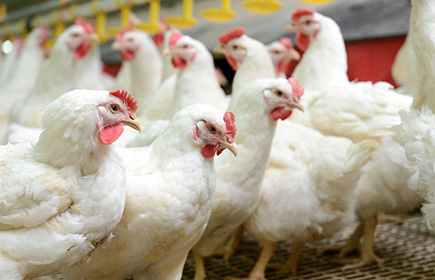 Avian influenza viruses has the ability to infect not only birds, but also mammals

Avian influenza viruses have proved to possess the ability to infect not only domestic and wild birds (which are the natural reservoir of the virus), but also  non-avian species as mammals and, in some instances and in the presence of some subtypes of the virus, also humans.

These viruses are able to quickly infect the birds in poultry flocks, and may quickly widespread to different farms in vast geographic areas.

The transmission can occur from wild birds to poultry or poultry-to-poultry, but the movement of infected birds or contaminated material (i.e., feed) can also be a possibility.

Rodents as a risk factor

Rodents (such as mice, rats and voles) are present in high numbers not only in rural, but also in urban and periurban areas and they serve as vectors and reservoirs of a large number of infectious organisms, which may cause diseases both in animals and in man. As they can freely move in and out of the poultry environment, modern zootechnical plants pay particular attention to the control measures which can be implemented to limit the presence of these “unpleasant” guests.

Although rodents cannot be considered the main cause of transmission of avian influenza, they may represent a risk factor in the spreading of the infection among poultry farms. However, the existing scientific literature does not report sufficient data on the susceptibility of “wild” rodents to the infection and to the disease caused by this virus, nor it has been ascertained that they are able to maintain it in the environment. 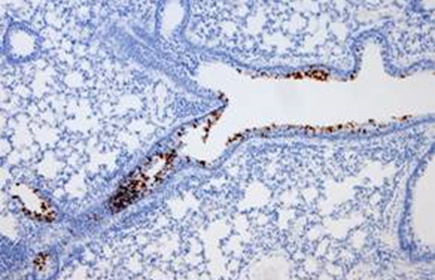 The image shows the presence of the virus in the bronchial epithelium of the bank vole.

One of the main objectives of the research was to collect enough information on the role of wild rodents in avian influenza epidemiology, taking as a model a rodent which commonly inhabits European rural and forestry areas: the bank vole.

The study has demonstrated that these rodents are susceptible to the infection of highly pathogenic (in poultry) avian influenza viruses of the H5 and H7 subtypes and they are able to shed the virus via nasal route without showing any evident signs/symptoms of the disease. As well, the viral excretion is sufficient to infect other voles which have entered in contact with the infected ones.

Research results has been published on Veterinary Research.

These data add further information to the existing scientific knowledge on the possible ways of transmission of the disease, and they allow us to tailor more effective prevention and control strategies to limit the diffusion of the infection.

Read the article on Veterinary Research »