Skip to content
Home>Geographical screening of Italian EVO oil. Development of a non-targeted model to determine whether the area of origin is Italian

Geographical screening of Italian EVO oil. Development of a non-targeted model to determine whether the area of origin is Italian

Researchers from the Experimental Chemistry Laboratory of the Istituto Zooprofilattico Sperimentale delle Venezie (IZSVe) have developed a simple, effective method of geographical screening to differentiate extra virgin olive (EVO) oil of Italian origin from EVO oils from other countries. The non-targeted method, based on the combination of Raman and near-infrared (NIR) spectroscopy techniques, has recently been published in the Journal of Near Infrared Spectroscopy.

Due to climate change and the Xylella fastidiosa epidemic, there has recently been a decline in the annual production of Italian EVO oil. To meet consumer and food industry demand, Italy is forced to import oils from other countries, making it vulnerable to increased risk of fraud, i.e. oils sold as Italian which are instead blends of Italian and European or non-European oils. Researchers at IZSVe’s Experimental Chemistry Laboratory (SCS8) have developed a rapid method for differentiating Italian oil from oils of other origin (in the study case, Greek) based on the sample’s chemical composition. 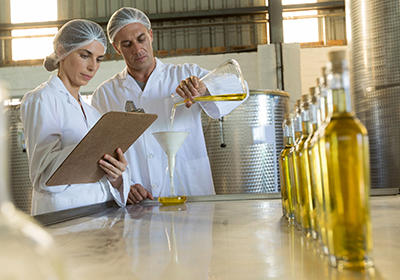 Researchers from the Experimental Chemistry Laboratory of the Istituto Zooprofilattico Sperimentale delle Venezie (IZSVe) have developed a simple, effective method of geographical screening to differentiate extra virgin olive (EVO) oil of Italian origin from EVO oils from other countries. Thirty-three samples of oil were analysed by a non-targeted method, clearly and distinctly differentiating between the two test groups, namely Greek and Italian oils. This method may ensure the traceability and quality of extra virgin olive oil and prevent commercial fraud.

IZSVe’s approach combines spectroscopy with machine learning techniques: starting from exploratory analysis of the data collected at the laboratory, the team were able to retrieve the most significant variables with which to develop a statistical model capable of identifying the specific chemical characteristics of the oils being tested in order to expose any commercial fraud. The model was subsequently validated using unknown samples to establish its predictive performances

Thirty-three samples of oil were analysed by Raman and NIR spectroscopy. These are non-destructive techniques which provide rapid responses and do not require sample preparation, thereby minimizing time and costs. Furthermore, these techniques have the advantage of being sustainable (for example, no solvents are used) and compliant with the principles of green chemistry.

The resulting PLS-DA model was then cross-validated, reaching 100% sensitivity, 97% accuracy, and 88.9% specificity.

The integrated analysis system proposed by IZSVe’s study provides a tool for fully and rapidly identifying the composition of this foodstuff and classifying it by geographical origin. This extremely valuable information for both producers and consumers may ensure the traceability and quality of extra virgin olive oil and prevent commercial fraud, which can also have public health implications.

Data fusion obtained with NIR and Raman spectroscopy has proven very promising: the resulting classification model can be considered  promising tool for differentiating EVO oils produced with Italian olives from oils of non-Italian origin. Being a preliminary study, new samples will be added to the initial dataset to improve the accuracy of the model. Tests on the oil matrix mark a new addition to previous studies conducted by the Experimental Chemistry Laboratory on other foodstuffs (e.g. origano, fish and milk). These have likewise confirmed the efficacy and strategic importance of this non-targeted approach in reliably determining the authenticity of foodstuffs.

Read the scientific article on JNIS »