A large international consortium recently provided a review and summary of current and new paradigms to assess risks to human health related to nano- and microplastics, adopting a holistic approach. The approach consisted of a targeted combination of technology development, data acquisition using said technology, modelling, communication, dissemination and scientific leadership. The review was published in Nanoplastics and Microplastics, a leading journal in the field.

The consortium, led by the Istituto Zooprofilattico Sperimentale delle Venezie (IZSVe) and called Plastirisk, brought together prominent EU experts in an integrated research proposal to fully address the risks to human health associated with the ingestion and inhalation of nano- and microplastics. 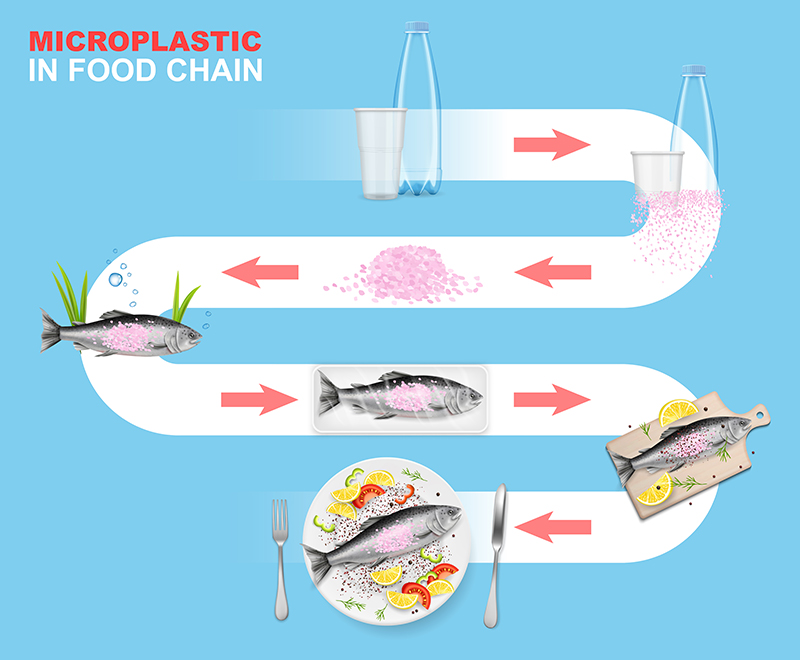 The presence of microplastics (and nanoplastics) in food and drinking water has sparked major concerns among the public, policymakers, and the scientific community in terms of the adverse effects on humans. A large international consortium – led by the IZSVe – recently provided a review and summary of current and new paradigms to assess risks to human health related to nano- and microplastics, adopting a holistic approach.

Human exposure to nano- and microplastics has raised major concerns at the societal level, but no framework to assess the risks of nano- and microplastics for human health existed until this review was published. A substantial proportion of the plastics produced worldwide is not properly disposed of and persists in the environment for decades while degrading. Plastic degradation generates a size continuum of fragments, including nano- and microplastic particles (NMPs), with numerous associated environmental pollutants and plastic additives, in addition to microbial communities colonising their surfaces.

The presence of microplastics (and nanoplastics) in food and drinking water has sparked major concerns among the public, policymakers, and the scientific community in terms of the adverse effects on humans. The media has considerably influenced perception of the risks associated with plastic and there is consensus and momentum for action. At the political level, the European Commission  has responded by working closely with scientific advisory boards and stakeholders to undertake scientifically informed actions to effectively manage plastic pollution. The ubiquitous presence of NMPs, their availability for uptake by organisms, and their potential to act as vectors for toxicants and pathogens make risk assessment a priority on the global political agenda.

However, two conditions need to be fulfilled before any management, mitigation, and risk communication actions regarding microplastics can be successful. First, there needs to be a thorough understanding of the mechanisms driving exposure and risk. Most importantly, the risk needs to be quantified, including any uncertainty surrounding it, in relation to current exposure scenarios and future scenarios. This is not possible at present due to the scarcity of exposure and hazard data and the limitations of measurement techniques. Second, there is a lack of conceptual tools able to adequately address the complexity and diversity inherent to microplastics occurring in our natural and domestic environments.

Starting from the above considerations, the review proposes a new, fully integrated framework tailored to the specificities of NMPs, allowing assessment of current and future risks to human health associated with NMPs. The framework integrates four novel paradigms into traditional risk assessment methodology. These paradigms deal with techniques in NMPs analysis, gaps in empirical data, theoretical and modelling approaches, and stakeholder engagement. Within the proposed framework, the consortium suggests how research experience achieved to date can be used to carry out the different steps of the assessment process, and defines priorities for further investigation.

Read the scientific article in Nanoplastics and Microplastics »