Skip to content
Home>Losses of honey bee colonies over the 2015/16 winter. Preliminary results from the COLOSS study

Losses of honey bee colonies over the 2015/16 winter. Preliminary results from the COLOSS study 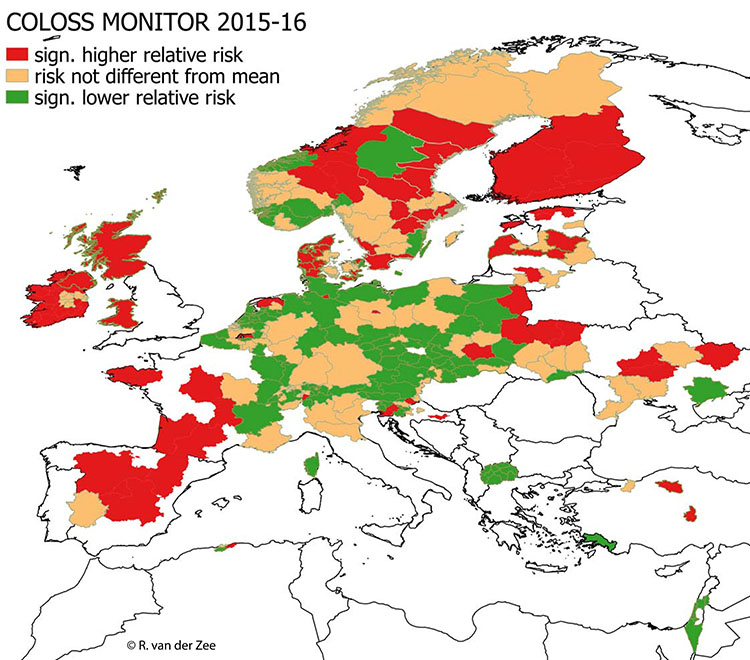 The honey bee research association COLOSS has today announced the preliminary results of their international study of colony losses over the 2015-16 winter.

Data were collected from 29 countries in this initiative, which is the largest and longest running international study of honey bee colony losses. In total 18,693 respondents provided overwintering mortality and other data of their colonies. Collectively, all responding beekeepers managed 399,602 honey bee colonies. The overall proportion of colonies lost was estimated as 11.9 %.

The protocol used to collect this COLOSS data has been internationally standardized to allow comparisons and joint analysis of the data. A more detailed analysis of risk factors calculated from the whole dataset , as well as further colony loss data from other countries, will be published later in the year.

“These loss rates vary considerably between countries. In this year’s survey the highest losses were found in Ireland and Northern Ireland, followed by Wales and Spain. The pattern of loss rates differs from last year, when higher mortality and loss rates were found in central Europe and countries to the east. This year the higher loss rates tend to be in the west and northern countries, although Spain had high rates of loss in both years. All the loss rates quoted here include losses due to unresolvable queen problems after winter, as well as colonies that died over winter for various reasons. Losses due to queen problems were unexpectedly high in some countries and this will be a matter of further investigation.”

“Spring and early summer (March-July) were cold in Norway, Scotland, Sweden, Denmark and Ireland, with mean temperatures ranging from 12.8 – 14.4 °C. This may have had negative effects on colony development, resulting in both relatively high numbers of dead colonies and unsolvable queen problems after winter. A more detailed analysis may reveal the effects of other important factors, such as the role of the honey bee parasite Varroa destructor.”