The study entitled “SARS-CoV-2 infection and replication in human gastric organoids” and published in Nature Communications stems from the work of an international team which developed a model of the human stomach in the laboratory to explore how infections impact the gastrointestinal system.

As the COVID-19 pandemic has progressed, various hospitals have reported gastrointestinal symptoms of the disease, particularly in children, alongside the more common effects, such as coughing and respiratory difficulties. Based on this evidence, an international research team – led by Nicola Elvassore, of the Veneto Institute of Molecular Medicine (VIMM) and the Department of Engineering of Padova University, together with Paolo De Coppi, of Great Ormond Street Institute of Child Health at University College London – has developed and adapted a model of a mini-stomach to study how SARS-CoV-2 infection affects the stomach of children. The resulting study has been published in Nature Communications. 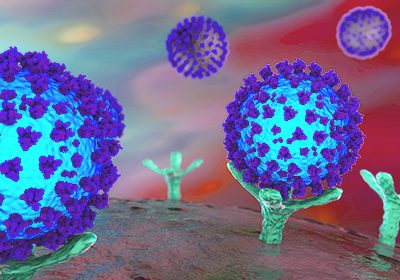 An international research team, joined by virologists from the IZSVe, developed a model of the human stomach in the laboratory to explore how SARS-CoV-2 infections impact the gastrointestinal system. This enabled the researchers to demonstrate the virus’ ability to replicate within the stomach, which was more marked in organoids grown from paediatric and late fetal cells compared to adult and early fetal cells.

The experimental evidence stemmed from recent progress in the creation of “mini organs” in the laboratory, known as organoids. These organoids provide researchers with inestimable tools for studying organ functioning at both the physiological level and in conditions of disease. In the case in point, the researchers were able to create an in vitro model that mimics human stomach functioning, and replicates its behaviour at the various development stages – fetal, child and adult. They isolated stem cells from stomach samples of patients and cultivated them in the laboratory under controlled conditions to produce a mini-stomach in a dish.

Thanks to collaboration with a team of virologists, led by Francesco Bonfante of the Department of Comparative Biomedical Sciences at the Istituto Zooprofilattico Sperimentale delle Venezie (IZSVe), it was possible to simulate an intragastric infection, by exposing the surface of the mini-stomach’s cells to SARS-CoV-2 virus. This enabled the researchers to demonstrate the virus’ ability to replicate within the stomach, which was more marked in organoids grown from paediatric and late fetal cells compared to adult and early fetal cells.

The study also observed the impact of the infection on the cells within the organoids, showing that a specific group of cells – called delta cells, which produce the hormone called somatostatin – was destroyed by the virus. This could explain some of the gastrointestinal symptoms occurring in patients.

“This study marks a further step towards the development of innovative platforms that can rapidly characterize the pathogenic potential of emerging viruses such as SARS-CoV-2 and appreciably increases our ability to assess risk,” stated Francesco Bonfante, a researcher in veterinary science at IZSVe and first co-author of the study. “As a veterinarian I believe these mini-organs offer a very high-profile alternative to preclinical animal models and fully meet the growing demand for scientifically valid but ethically sustainable biomedical research”.