Rabies in Africa: the RESOLAB network

At the end of 2008, fox rabies re-emerged in North-eastern Italy; however, intervention plans were immediately implemented by the National Authorities, supported by the European Union, and the disease was controlled and eliminated. At the beginning of 2013 Italy recovered its rabies-free status, the last case being notified in a red fox in early 2011.

Unfortunately, in most countries throughout the world such rapid and effective interventions are not possible due to the lack of funding. Rabid domestic animals live in close contact with the population, which inevitably leads to the virus transmission to humans.

About 60,000 people die of rabies worldwide each year, Africa being the second most affected continent counting over 36,000 deaths. Children under the age of 15 are the most vulnerable and exposed to the risk of infections, although rabies can infect people of all ages. Forty per cent (40%) of post-exposure vaccinations are administered to patients between 5-14 years of age.

The prevention and control of rabies in Africa is truly difficult. The population is affected by numerous life threatening illnesses and this inevitably overshadows what are defined as “neglected diseases”, considering that the available resources are destined to resolve other sanitary emergencies with a high health impact (i.e. AIDS, malaria, polio).

African veterinary services should play a crucial role in surveying  the disease epidemiological situation, implementing control strategies and eliminating the disease at its source (the dog). Veterinary laboratories able to carry out a reliable rabies diagnosis on a routine basis are the pre-requisites to achieve these goals.

The RESOLAB network and the activities of the Rabies Reference Center 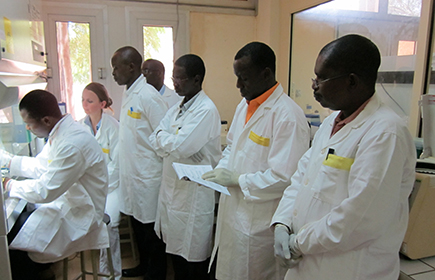 For more than four years the experts of the FAO Rabies Reference Center at IZSVe have set these as the priority objectives to achieve by supporting the RESOLAB (the West and Central Africa Veterinary Laboratory Network for avian influenza and other transboundary diseases) laboratory network with scientific and technical support. In December 2010 twenty-three (23) experts from west and central Africa launched a rabies sub-network.

In the last three years the missions supporting these initiatives have become more and more frequent. The staff of rabies experts from IZSVe with the support of the FAO, have trained African laboratory technicians, veterinarians and technicians from public health on rabies diagnostic techniques. They travelled to Kinshasa (The Democratic Republic of Congo), Brazzaville (Republic of Congo), passing through the green forests of Garoua (Cameroun), Libreville (Gabon) and Kigali (Ruanda).

The Brazzaville laboratory in the Republic of Congo is an example of the expected outcome of these missions. While the training activities were being performed at the Laboratoire de diagnostic Vétérinaire de Brazzaville in June 2013, the number of reported dog biting events significantly increased and, in October 2013, the first rabies human case was suspected, with the death of the patient.

Unfortunately the Republic of Congo, as for most of the countries in the region, had never diagnosed or notified any laboratory-confirmed rabies cases in humans. Thanks to the prompt action of the local veterinary services, some days later the first specimen of animal origin (a biting dog) was submitted from Pointe Noire, where the outbreak was suspected to have occurred. The Brazzaville Laboratory confirmed the presence of the disease and for the first time in the history of the country, rabies was openly declared as being present throughout the territory and notified to the OIE.