Skip to content
Home>Salmonella Infantis in broiler farms. Cleaning and disinfection procedures: an issue to explore

Salmonella Infantis in broiler farms. Cleaning and disinfection procedures: an issue to explore

Salmonella Infantis is considered an emerging serovar in Europe and is widespread across the entire poultry foodchain. Currently it is one of the most frequently isolated serovars not only in broiler farms and poultry meat, but also in turkey farms and derived products. There is evidence that this serovar has been isolated also in other ecological niches. 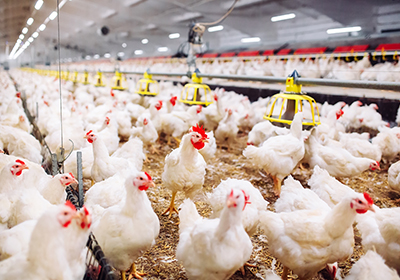 Salmonella Infantis is considered an emerging serovar in Europe and is widespread across the entire poultry foodchain. Currently it is one of the most frequently isolated serovars not only in broiler farms and poultry meat, but also in turkey farms and derived products. At farms, positivity is most efficiently detected in litter and environmental dust.

At farms, positivity is most efficiently detected in litter and environmental dust. In addition, cleaning and disinfection procedures appear to play a critical role in containing positivity. Findings to this effect have been reported in a study conducted by the Italian National Reference Centres for Salmonellosis (Istituto Zooprofilattico Sperimentale delle Venezie – IZSVe) and Antimicrobial Resistance (IZS Lazio and Tuscany), funded by the Italian Ministry of Health, to investigate risk factors underlying the spread and persistence of S. Infantis in the broiler industry.

In isolates of S. Infantis, researchers observed the presence of antimicrobial resistance genes, which can impair the effectiveness of antibiotics against bacterial infections in humans. Besides the elevated prevalence observed in the poultry industry, S. Infantis strains, characterized by a high level of antimicrobial resistance, are also isolated from humans, posing a great public health concern. The study ended in December 2020.

A study on Italian poultry farms

A number of 76 Italian broiler farms selected in collaboration with the leading poultry producers, on the basis of representative criteria, were included in the study: 38 farms had recurrent infections (i.e. in which S. Infantis was repeatedly isolated) and 38 were found Salmonella negative. All the farms were visited twice to assess the environmental spread of S. Infantis: before the animal arrival (pre-breeding phase) (i.e. with the broiler shed empty, cleaned, disinfected, and ready to receive a new batch) and towards the end of the productive cycle.

During the first visit, information was collected to explore potential risk factors associated with the presence of S. Infantis, using a structured questionnaire based on an official biosecurity checklist validated by expert veterinarians. Regarding the sampling towards the end of the productive cycle (the time point set by the Italian National Plan for Salmonellosis Control in Poultry Farms) 51 farms tested negative and 25 were positive for S. Infantis.

Litter and environmental dust: the collection points with the highest positivity rate 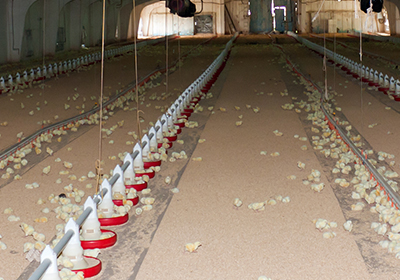 According to a study conducted by the IZSVe and other research partners, at farms positivity for S. Infantis is most efficiently detected in litter towards the end of the productive cycle, while the anteroom was the most informative collection point in the pre-breeding phase.

Comparison of the positive samples from the two tested matrices (litter residues collected from overshoes and environmental dust from tissue swabs) confirmed that litter is the most effective matrix for detecting positivity, although the optimal way to identify positivity is undoubtedly to combine both matrices.

Positivity was also identified in the pre-breeding sampling, with most cases being isolated outside the broiler house(particularly the external perimeter). Where a facility tested positive in this phase but not towards the end of the productive cycle (9 farms), this was conceivably due to implementation of effective biosecurity measures.

Findings showed that inside the broiler house, the anteroom was the most informative collection point in the pre-breeding phase, being more frequently contaminated with S. Infantis. However, sampling is optimized when it includes several collection points.

The questionnaire permitted potential risk factors for the presence of S. Infantis in broiler farms to be identified. The most significant among them were associated with the presence of: 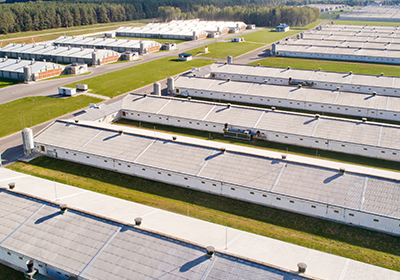 The study identified as the main potential risk factors for the presence of S. Infantis in broiler farms: recurrent S. Infantis infections; large houses (>1,500 m2); several houses in the same facility. Cleaning and disinfection methods have proven to have an impact on S. Infantis presence and persistence.

Do cleaning and disinfection methods impact on S. Infantis persistence ?

It cannot be ruled out that biocides and their application methods may select tolerant strains of S. Infantis and foster their persistence, to the detriment of the competitive microbial community, which therefore appears to exert a “protective” effect.

All isolated strains of S. Infantis were genetically characterized using next generation sequencing. Findings have confirmed the well-known spread of antimicrobial resistance genes, including those conferring resistance to antibiotics deemed critical in the treatment of human bacterial infections. Moreover, this approach has permitted to identify two different lineages of S. Infantis to be identified in different geographical parts of Italy.