Skip to content
Home>Sex, age and height can influence learning in donkeys

Sex, age and height can influence learning in donkeys

Donkeys are more than capable of learning! They are even more motivated to do so when promised a reward. In many animal species, the use of positive reinforcement encourages the ability to learn something which is taught, but not part of the species’ natural behaviour. In the case of donkeys, several individual factors, such as sex, age and height, can influence the learning ability of individual animals.

These findings are reported in a study conducted by researchers at the Italian National Reference Centre for Animal-Assisted Interventions (AAI), who explored the learning capabilities of a group of donkeys routinely involved in AAI. The objective was, on the one hand, to understand whether and after how long this species could learn a task using operant conditioning and, on the other, how several individual variables influenced their cognitive ability. Results may be useful in the perspective of animal-assisted interventions, considering that animals’ educational pathways must be designed to foster collaborative behaviour with the persons participating in the therapy, while providing tangible benefits in terms of animal-human relationships.

Press the buzzer to get a feed reward 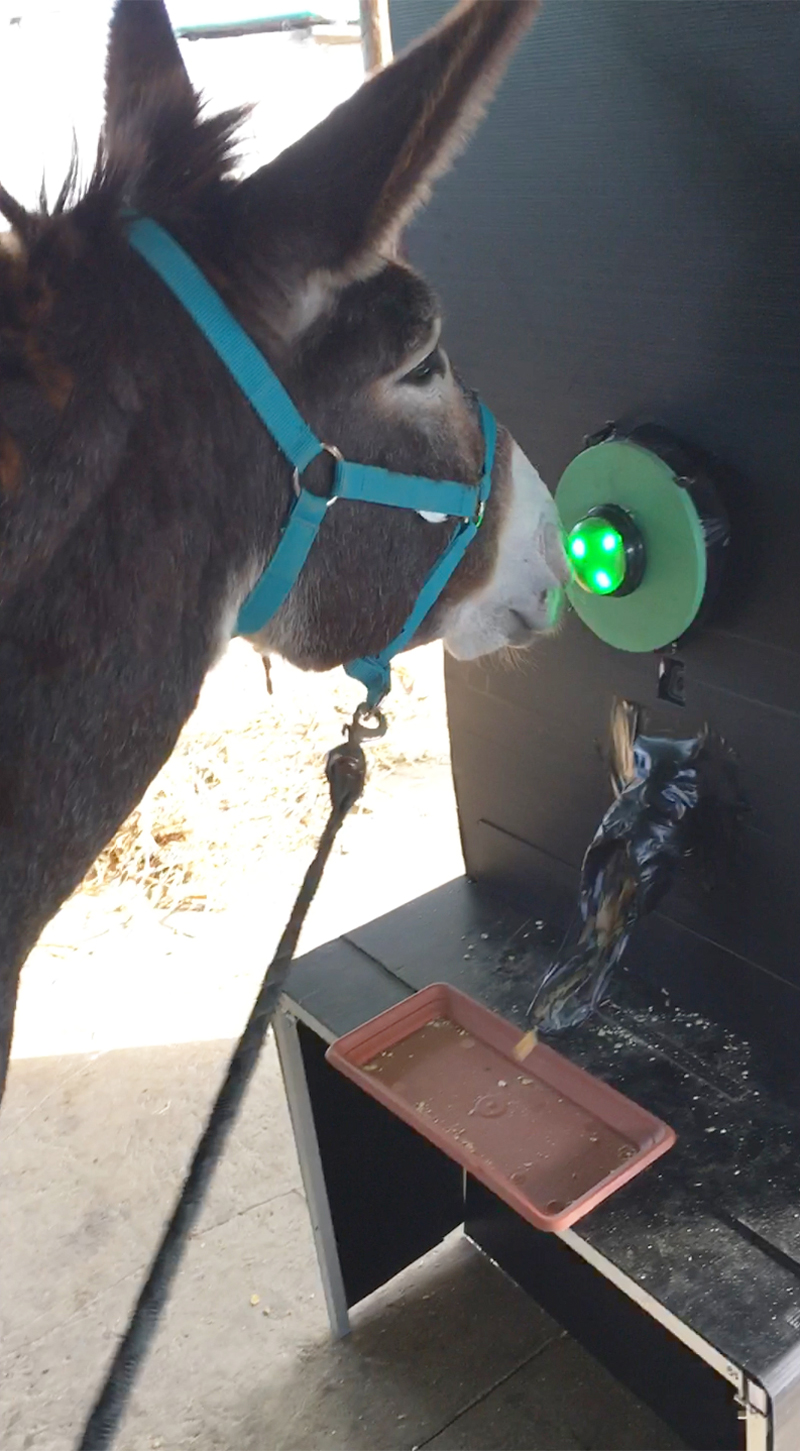 An experimental research by the Italian National Reference Centre for Animali Assisted Interventions (NRC AAI) has shown that the learning of a task through operating conditioning in donkeys can be influenced by the sex, age and height of the animals involved. The researchers involved 14 donkeys in a series of sessions in which, at the push of a button by the donkey, a reward consisting of food was released. Females were faster than males in understanding and performing the task, but males showed a more consistent improvement in their performance as the sessions progressed.

Although donkeys have a long history of domestication and cohabiting with humans, the mechanisms underlying their cognitive and learning processes have not yet been fully investigated. Researchers from the Istituto Zooprofilattico Sperimentale delle Venezie selected a group of donkeys to take part in a training procedure based on “operant conditioning”. This concept refers to a learning mechanism in which the subject’s response is not a mechanical reflex to an external stimulus; rather their response is conditioned by obtainment of positive reinforcement or avoidance of a negative stimulus: the donkey learns to behave in a certain way because it knows it will receive a reward or avoid a certain “punishment”.

The training took part in two stages: a learning stage (composed of 4 sessions lasting a maximum of 10 minutes each) and a final stage, designed to “fix” the behaviour (one session lasting a maximum of 10 minutes). The two stages differed according to the maximum number of rewards that could be obtained by the animal (15 and 10, respectively) and to whether or not the animal was helped by one of the researchers to perform the requested behaviour (aided and unaided, respectively).

For the donkeys, the task consisted of pressing a buzzer on the front panel of a cabin to receive a feed reward. During the various learning sessions, a researcher trained the donkey and supported its achievement of the goal. The donkeys that were able to press the buzzer autonomously 10 consecutive times were admitted to the final session, being deemed to have learned the task. The final session was conducted three days after the final learning session, serving as confirmation that the donkey had learned the behaviour and remembered it even after a few days had elapsed.

Time as a measure of learning

14 donkeys took part in the training, 9of which completed the whole procedure. Failure to complete the procedure was not related to learning ability or motivation to perform the task but to oestrous onset in four of the five unsuccessful donkeys and to injury prior to the final session in one. In any event, 10 donkeys showed that they had learned the association press the buzzer à reward within the learning stage, i.e. within a maximum of 40 minutes.

Among the first overall findings to emerge was the increased performance speed between one session and the next, indicating that the donkeys gradually understood the task they were requested to perform, and were able to carry it out more rapidly. The average time taken to obtain the 15 permitted rewards fell from 9’30” in the first training session to 5’15” in the fourth and to as little as 2’56” in the final session (which only provided 10 positive reinforcements).

As confirmation of the progressive learning process, the decrease in the time taken to complete the session was also accompanied by a rise in the total number of “complete” buzzer pressures performed, increasing from an average of 80% of the pressures permitted in the first session, to the achievement of 100% by all the animals in the fourth session. In addition, the improvement in the donkeys’ buzzer-pressing technique – which had to be performed completely and independently – was confirmed by the progressive decrease in errors made (incomplete pressures, unsuccessful attempts) and in the aid provided by the researchers – who were completely absent in the final sessions.

Learning performance levels were then measured by the average time taken between two consecutive buzzer pressures. These values were then positively correlated with three variables: sex, age, and height. The females proved to be significantly faster than the males in understanding and performing the task. Females had learned the tasks by the third session, while males did so between the third and fourth sessions. However, males’ performance improved more rapidly as the sessions progressed, enabling them to achieve comparable performance levels to the females by the end of training. Considering instead the age and height of the animals, older, taller donkeys took longer on average to complete the training sessions, probably related to visibility (given that the height of the button was fixed) and to the less impulsive nature of the older donkeys.

Besides learning: the emotional dimension 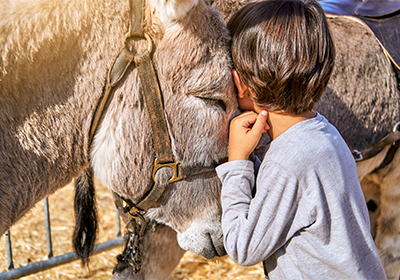 With the same group of donkeys, the NRC AAI also conducted a study on the emotions of these animals, in order to understand how their mental states manifest at the physiological, behavioral, postural level, and in facial expressions. The challenge for the NRC AAI researchers is to define a methodology to evaluate emotional states in the domestic donkey to promptly assess how the donkey is experiencing a given situation, such as an AAI.

The operant conditioning paradigm used in this study consists of performing and learning a behaviour which, following positive reinforcement, is progressively improved and “fixed” by the animal. As regards the “psychological” aspects of this process, the learning pattern consists of a series of fundamental cognitive steps: identification of the causal link between action and reward, awareness of the task, intentional nature of the action, and commitment to memory of the experience in subsequent sessions.

To corroborate this preliminary study conducted by the National Reference Centre for AAI, the effect of sex, age, and height on donkeys’ learning abilities warrants closer future investigation, involving a larger cohort of animals. This will help to clarify the role these characteristics can play not only in the learning process per sé, but also with a view to positively and effectively involving donkeys in activities proposed and organized in animal-assisted intervention settings.

Despite their reputation as stubborn and unsociable, donkeys have always been precious companion animals for humans in a variety of different activities, ranging from work to therapy. In-depth exploration of their cognitive and behavioural abilities, while broadening the scope to include aspects such as memory, motivation, and emotions, will help enhance their welfare and relationship with humans.

Donkeys’ emotions are at the centre of another new study conducted by the National Reference Centre and includes the participation of the same group of donkeys. The aim is to understand how these mental states manifest at physiological, behavioural, and postural level, and in facial expressions. The study and measure of emotions in donkeys is the subject of much debate in the scientific community due to various limits and difficulties that are encountered. One is the fact that the conscious experience of emotion cannot be measured directly; emotions are characterized by complex neurophysiological mechanisms which manifest through behaviours, postures, and alterations in physiological parameters, such as heart rate.

The challenge for the National Reference Centre for AAI is to define a methodology to evaluate emotional states in the domestic donkey which is reliable, objective, simple to perform, and non invasive. It will identify indicators (specifically facial expressions, postures, and behavioural manifestations) able to promptly assess how the donkey is experiencing a given situation (e.g. an animal-assisted intervention), given the ability to recognize the manifestation of positive and/or negative emotional states in this species.