Skip to content
Home>Targetfish, a vaccination strategy to support the European aquaculture industry

Targetfish, a vaccination strategy to support the European aquaculture industry

The TargetFish project (Targeted disease prophylaxis in European fish farming) was completed in September 2017. It was a large and international collaborative project whose main objective was to prevent important fish diseases in the European aquaculture industry by developing effective vaccination strategies.

The Project began in 2012 and was funded with 6 million euro by the European Commission 7th Framework programme – Programme for research and technological Development (Grant Agreement No. 311993). It included 30 collaborators, both industrial and academic, across 13 EU countries.

The Istituto Zooprofilattico Sperimentale delle Venezie (IZSVe) participated in the project coordinated by Wageningen University (The Netherlands) with the researchers of the OIE Reference Laboratory for Viral Encephalopathy and Retinopathy of Marine Fish.

The IZSVe contributed to the project by performing in-depth studies on Viral Nervous Necrosis (VNN), one of the most threatening viral diseases affecting sea bass. The main objective was to work on the development of vaccines against this infection.

In the specific, the IZSVe researchers concentrated on the following issues: 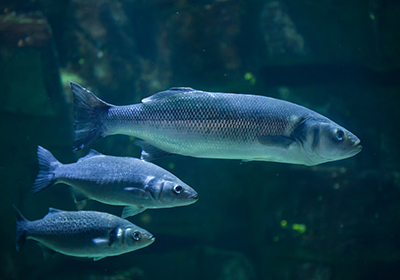 The IZSVe participated in the Targetfish project to investigate various aspects of viral encephalopathy and retinopathy, the main viral disease of sea bass. Some of the prototype vaccines which were experimentally studied turned out to be very promising and will be further improved thanks to future research activities.

Some of the prototype vaccines which were experimentally studied at the IZSVe turned out to be very promising and will be further improved thanks to future research activities.

Results of the project

Overall, the joint activities carried out by the European groups have contributed to achieve the following tasks:

These results have already been presented to the scientific community during the most relevant workshops and meetings of fish pathology. Thanks to the TargetFish project, more than 100 scientific articles have been published and a special issue of the Journal Fish and Shellfish Immunology will appear by the end of 2017.

In addition, the TargetFish consortium organized four industrial workshops specifically tailored to transfer the results also to the production sector. Several other relevant events were organized with the intention of disseminating the knowledge and achievements obtained. The IZSVe actively participated in the fourth TargetFish progress meeting, which was held in Chioggia (Venice) in 2016.

Additional information on the Targetfish project are available at the following web address:  http://targetfish.eu