The avian influenza (AI) epidemic of 2016-2017 had been the largest in Europe in more than 10 years. The circulating virus was a Highly Pathogenic (HPAI) H5N8 strain, which caused over 1,200 outbreaks in poultry farms with extremely high lethality rates, leading to massive economical losses. The virus largely spread also to wild birds, mainly waterfowl, with hundreds of cases reported all over Europe.

Italy had been heavily affected, involving 2.7 million of domestic birds in 83 infected farms, mostly located in the northern Italian regions with the highest density of poultry premises: Lombardy, Emilia Romagna, and Veneto. The epidemiological situation in Italy presented peculiar characteristics, with respect to the events reported in most of the affected European Countries. The AI cases occurred within two distinct epidemic waves: the first between December 2016 and May 2017, and the second lasting between July and December 2017. The virus circulation was markedly more intense in the second epidemic wave, leading to 67 outbreaks in poultry farms (about 80% of the total cases recorded in domestic birds).

As a whole, the epidemic proved being particularly complex to tackle, requiring massive economical efforts: in Italy alone, the total expenses for disease containment reached about 40 million euros. One of the greatest issues in these cases concern the promptness with which control strategies are defined and measures are applied.

With the aim of improving the management of the epidemic, a team of researchers at the Istituto Zooprofilattico Sperimentale delle Venezie (IZSVe), composed of epidemiologists and virologists, adopted a multidisciplinary approach integrating epidemiological and phylogenetic information, allowing to reliably track the disease spread among farms and to re-modulate the containment strategy almost in a real-time fashion. The study has been published on the open access journal Scientific Reports.

Information collected on-field via epidemiological investigations (e.g. affected species, geographical distribution, movements of people, animals, and vehicles, and environmental characteristics) were integrated with the results of genomic analyses, to assess how the epidemiological situation was evolving and to detect how the disease could have spread among farms. In general such analyses are made after the conclusion of the epidemic, due to time constraint and efforts requires; in this case the potential routes related to the disease spread were detected and corroborated during the epidemic events. This proved paramount for the Competent Authorities, to define an array of suitable preventive measures to contain the disease and prevent its uncontrolled spread.

Genetic analyses revealed that the network of genetic similarities was comparable to the contact network between farms, permitting to infer the more likely routes of disease spread. The integration of epidemiological evidences with genetic analyses and bioinformatics allowed to obtain a more detailed picture of the H5N8 HPAI epidemic in Italy, strengthening the containment strategy, indicating how to re-modulate control and biosecurity measures. 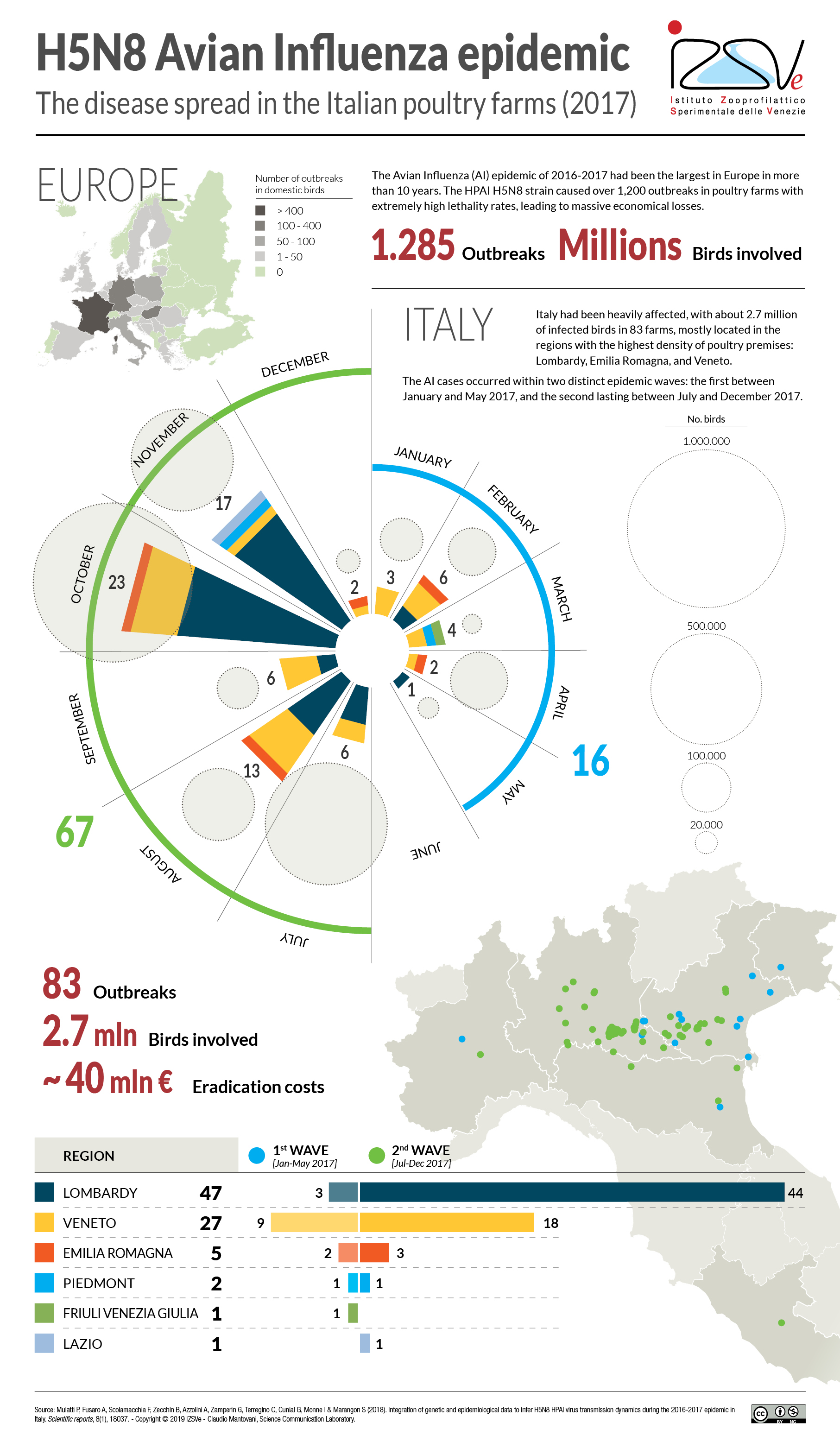