With more than 95% of cases occurring in Asia and Africa, and only few cases in developed countries acquired abroad, rabies is currently at the very bottom of the priority list of national authorities and donors.

Current spending on rabies vaccination. Click on the image to enlarge the infographic. Source: endrabiesnow.org

Canine rabies is a neglected disease of poverty. Ineffective disease diagnosis and reporting prevent rabies from becoming a higher priority disease for stakeholders.

Although rabies is an ancient disease, its burden and severe consequences are still misunderstood in endemic countries, where the key factor in preventing its spread is education.

Complete post-bite treatments, including vaccines and immunoglobulins, are often not available to bite victims in resource-poor regions where they are most needed.

The average cost of post-exposure treatment in these regions is 40 to 50 $, where the average daily income is about $1, making such an expense almost unaffordable to the victims and their families. Moreover, livestock losses due to rabies, still underestimated, directly affect food security and rural poor livelihoods.

Many achievements have been reached towards dog-mediated human rabies elimination in low-resourced countries. Pilot projects have proved the feasibility of sustainable dog mass-vaccination campaigns and valid alternatives to the existent diagnostic gold standard test have been developed.

International organizations have joined their efforts in advocating disease control and have developed a stepwise approach, to measure the progress towards rabies elimination at a country level. 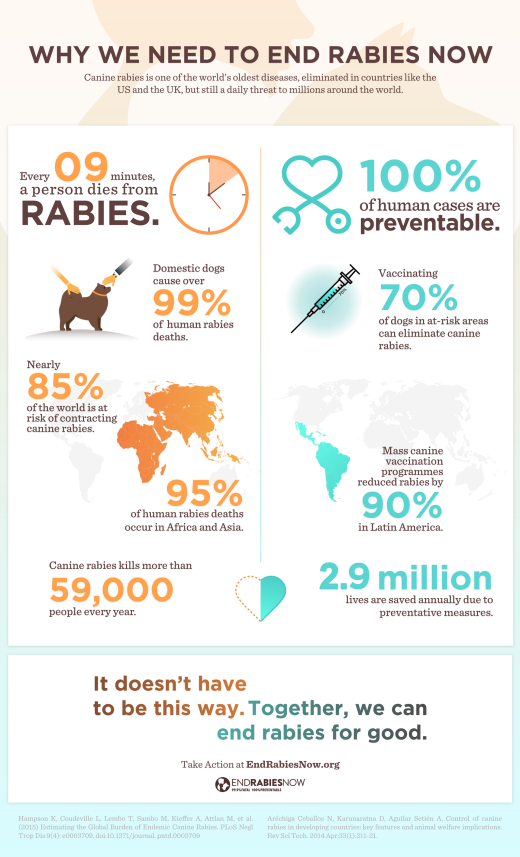 Why we need to end rabies now. Click on the image to enlarge the infographic. Source: endrabiesnow.org

In the last years, the IZSVe and the FAO reference center for rabies have been committed to supporting this effort by providing useful information and implementing training activities aimed at improving diagnostic approaches and prevention strategies against rabies in Africa, the Middle East and eastern Europe.

As well, joint efforts have been made to develop and validate alternative diagnostic tests and innovative methods for human rabies prevention and treatment.

Some years ago wildlife rabies re-emerged in north-eastern Italy. Nonetheless, we were able to efficiently control the disease, thanks to the joint efforts of both the animal and public health counterparts and the active collaboration of cross-border authorities.

Rabies knows no boundaries, but dedication and determination and overall extensive cooperation can make the difference for its control.

Many have been the successful initiatives worldwide and we expect to shift the attention of the key players towards the many under developed countries affected by the burden of the disease, where life expectancy in children is kept under serious challenge due to malnutrition and infectious disease.

Eliminating this terrible disease is a responsibility and a right of all of us. Let’s make rabies history by supporting the “End Rabies Now” campaign.

With commitment and funding from donors, local governments, countries and institutions, we could end human deaths from canine rabies by 2030 at a global level.