This report describes the genetic characteristics of the complete genomes of 27 European HPAI H5N8, H5N5 and H5N1 viruses recently identified in Belgium, Croatia, Denmark, the United Kingdom, Germany, Italy, the Netherlands, Poland and Sweden. Analyses are based on sequences produced by the EURL or deposited in GISAID by Member States (available on December 7, 2020).

The phylogenetic analysis of the HA gene reveals that all the European HPAI H5 viruses form a single genetic group within clade 2.3.4.4B, and cluster together with HPAI H5 viruses identified in Kazakhstan and in the Russian Federation starting from July 2020 (Figure 1). The H5N8 strain collected in Iraq in May 2020 and the H5N8 strains circulating in Egypt since 2017 are the most related viruses, suggesting that North Africa and South-West Asia might be the areas where the progenitors of the recent HPAI European viruses have circulated in the last few years; however, more genetic data from these regions are necessary to confirm this observation.

The characterization of the complete genome revealed that the European HPAI H5 viruses show distinct gene constellations, likely due to the occurrence of multiple reassortment events with LPAI viruses circulating in wild birds in Eurasia and Africa. According to the different gene composition of each analysed virus, we identified 5 distinct genotypes, consisting of one H5N8, one H5N1 and three H5N5 subtype viruses (Figure 2, obtained from the Scientific report: Avian influenza overview August – December 2020, in the EFSA Journal 2020). Four of these genotypes have been detected in Europe (namely i, ii, iv, v).

Three genotypes have been identified among the H5N5 viruses.

To investigate the dynamics of virus incursions and spread throughout Europe, we performed a discrete phylogeographic analysis based on the HA gene segment of the European H5Nx viruses. This investigation revealed that new viral introductions from Central Asia to Europe have occurred during the autumn wild bird migrations. We identified an intense viral movement among northern European countries (the Netherlands, Germany, Belgium, and Denmark) and a viral spread from North to South Europe (Figure 3). A more detailed phylogeographic reconstruction in continuous space supports these findings, further suggesting the occurrence of at least three different viral introductions from north to the southern European countries (Italy and Croatia) (video).

We gratefully acknowledge the authors, originating and submitting laboratories of the sequences from GISAID’s EpiFlu™ Database on which these analyses are based. 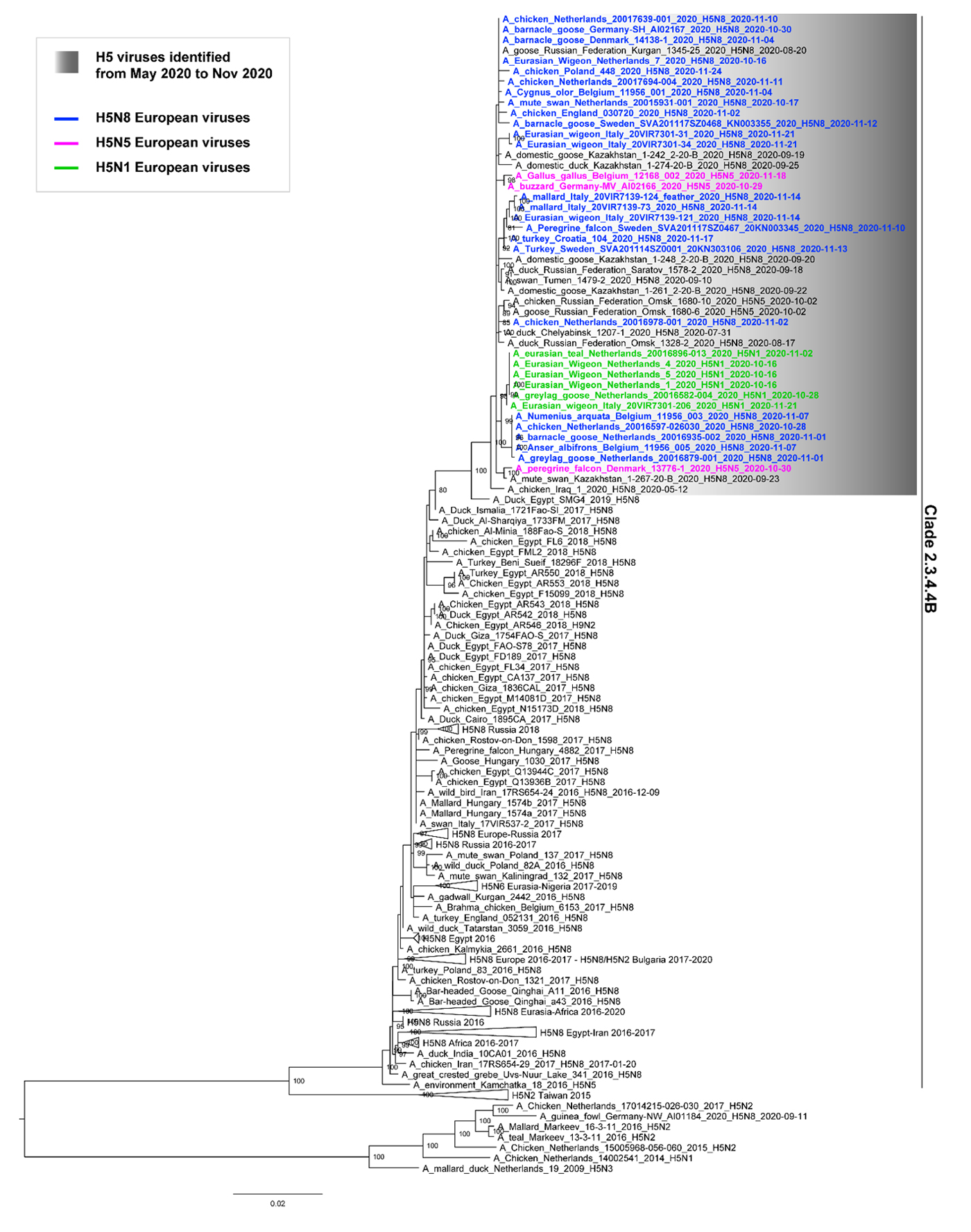 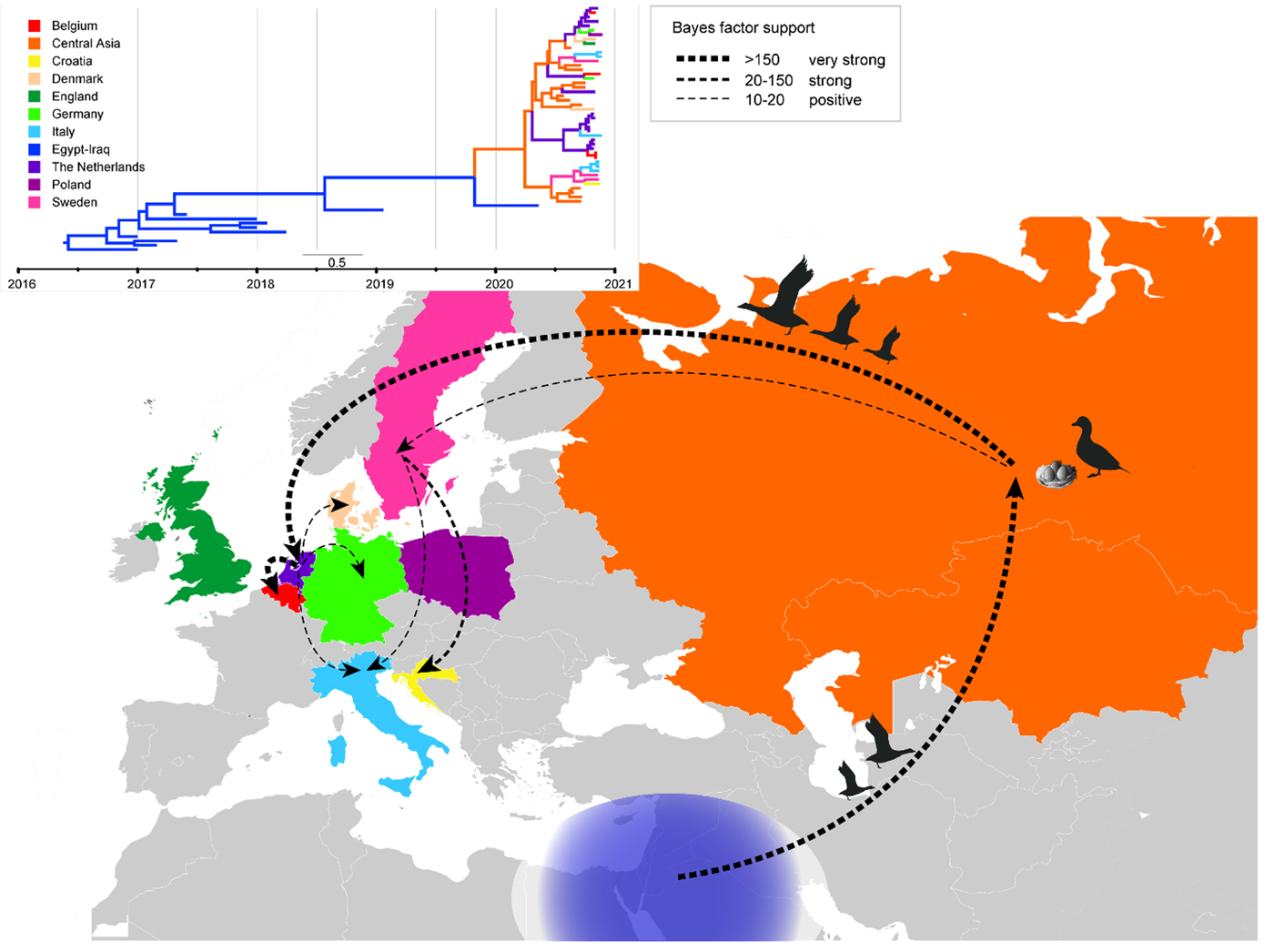 Figure 3. The map shows statistically supported non-zero rates for the H5 gene segment of HPAI H5Nx viruses identified in Eurasia starting from May 2020. The thickness of the dashed lines is proportional to the relative strength by which rates are supported: very strong (BF > 150), strong (20 < BF < 150) and positive (10 < BF < 20). Each country is labelled by the same colour used in the annotated Maximum Clade Credibility (MCC) Tree of the HA gene (top left), which shows evolutionary relationships among H5 viruses from Europe, Central Asia, Egypt and Iraq.

Video. Spatiotemporal dispersal patterns of the HPAI H5Nx viruses collected in Europe, Russia and Kazakhstan between 1st July and 24th November 2020, inferred using continuous phylogeographic analysis. The black lines and the dots represent part of the branches and the nodes of the Maximum Clade Credibility (MCC) Tree of the HA gene, obtained from the continuous phylogeographic analysis. Contours represent statistical uncertainty of the estimated locations at the internal nodes (95% credible contours based on kernel density estimates).