Skip to content
Home>Novimark. Studying Novirhabdoviruses to improve the health of trout and salmon

Novimark. Studying Novirhabdoviruses to improve the health of trout and salmon

The infectious hematopoietic necrosis virus (IHNV) and the viral hemorrhagic septicemia virus (VHSV) are the causative agents of two major infectious diseases severely affecting the fish industry in Europe. These virures belonging to the family of Rhabdoviridae, genus Novirhabdovirus, are endemic among wild marine fish species, which represent an immense reservoir, and have also established in freshwater cultured species, in particular in salmonids like trouts and salmons. 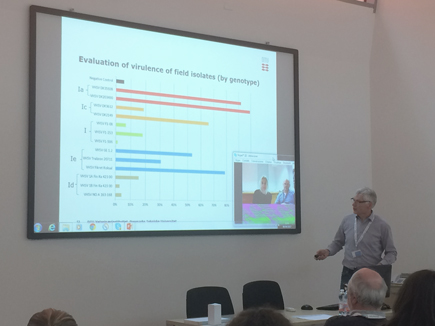 At present, no vaccination against IHNV and VHSV is carried out in Europe because of the lack of approved and effective immunization strategies.

However, due to the severe impact of IHNV and VHSV, the diseases caused by these viruses are controlled by means of strict national and international regulations, stamping out procedures and, importantly, early diagnosis.

Novimark is a 3-year (2015-2018) European research project whose main objective is to identify IHNV and VHSV molecular markers responsible for high and low virulence profiles, in order to develop and validate fast and reliable diagnostic tools for the discrimination between different viral phenotypes.

The application of such tests will allow to obtain important prognostic information on IHNV and VHSV virulence from laboratory data and to adopt the most effective containment measures in the field for each specific case.

A secondary objective of the project is to deepen knowledge on the molecular mechanisms determining the virulence of these pathogens to develop vaccine prototypes based on the use of attenuated strains.

The Istituto Zooprofilattico Sperimentale delle Venezie participates to the project by performing clinical investigations and the genetic characterization on a large panel of VHSV and IHNV strains isolated from Italian trout farms.

To this aim, IZSVe infrastructures and innovative equipment will be used, such as experimental facilities as well next generation sequencing (NGS) platforms. Besides, IZSVe will contribute also to the validation of the diagnostic methods developed in the framework of the project.

The Novimark project is funded by the Animal Health and Welfare ERA-Net (ANIHWA) program and coordinated by the Institut National de la Recherche Agronomique (INRA, France).

The project partners are: