Researchers from the European Union Reference Laboratory (EURL) for Avian Influenza at the Istituto Zooprofilattico Sperimentale delle Venezie (IZSVe), in collaboration with the colleagues from the Central Veterinary Laboratory in Madrid, Spain, identified a highly pathogenic H5N1 avian influenza (HPAI) virus in a mink farm in northwestern Spain. The results of the epidemiological, clinical and genetic investigations have been published in a paper in Eurosurveillance.

The facts date back to October 2022 when, following a sudden increase in mortality rate recorded in farmed minks, samples taken from symptomatic animals were sent to Spanish laboratories. Laboratory tests revealed the presence of the H5N1/HPAI virus.

The mechanism of introduction of the virus in the farm is currently unknown. According to the mortalities seen in wild seabirds in the previous weeks in the same region, caused by the H5N1/HPAI virus, the researchers assumed that the virus had possibly been introduced by wild birds. The spreading of the virus in the farm and the transmission among minks need to be investigated, and more studies are under way to look at the virulence and transmissibility of the virus. 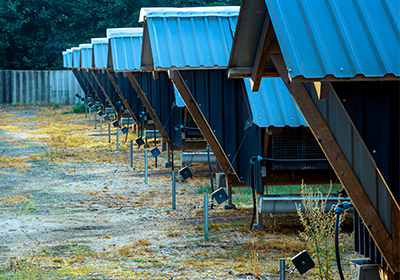 Genetic analyses revealed that the virus belongs to a well-known viral group (clade), responsible for the serious avian flu epidemic in domestic and wild birds that has been sweeping Europe and other parts of the world for over two years. The mink viruses differ from the strains described so far in European birds due to some mutations in their genome, whose biological impact is still unclear; nevertheless, it is important to underline that the most relevant genetic changes known to switch the receptor specificity from avian to human receptors and make the virus transmissible effectively from human to human, have not been identified in the mink viruses analyzed in the study. The authors also highlight that no case of infection was reported among the exposed workers.

The susceptibility of minks to infection with human and avian influenza A viruses has already been documented in several previous studies. Authors remark that it is necessary to strengthen the culture of biosafety and biosecurity in this farming system and to promote the implementation of ad hoc surveillance programs for influenza A viruses and other zoonotic pathogens at a global level. These interventions are instrumental to prevent contact between minks and wild animals, and to control disease transmission events from minks to farm workers and vice versa.

“This event indicates that the H5N1/HPAI virus is not just a matter of birds – says Dr Isabella Monne, veterinarian of the EURL for Avian Influenza and co-author of the study – it has the potential to spread in intensively farmed mammals. We are presently facing an unprecedented HPAI panzootic that has seriously affected not only the poultry sector but also several species of wild birds and this is a great threat to biodiversity. The continuous circulation of the virus within the wild population may disrupt the natural balance of the ecosystem and determine unknown consequences, also on the selective and evolutionary pressure of the virus. This particular event serves as a warning and reminds us that the HPAI avian virus does not affect the bird population alone and should therefore be managed by applying a multidisciplinary “One-Health” perspective. The continuous circulation of the virus poses great risks and may result in more spillover events in mammals. This would undoubtedly cause consequences difficult to predict. A virus that is able to transmit to mammals needs to be stopped before it may become a matter of public health concern as we learnt from the SARS-CoV2 lesson”.

Read the scientific paper in Eurosurveillance »